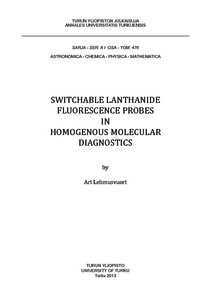 The number of molecular diagnostic assays has increased tremendously in recent years.Nucleic acid diagnostic assays have been developed, especially for the detection of human pathogenic microbes and genetic markers predisposing to certain diseases. Closed-tube methods are preferred because they are usually faster and easier to perform than heterogenous methods and in addition, target nucleic acids are commonly amplified leading to risk of contamination of the following reactions by the amplification product if the reactions are opened.

The complementation probe PCR assay method showed high signal-to-background ratio up to 300 due to a low background fluorescence level and the results (threshold cycles) in real-time PCR were reached approximately 6 amplification cycles earlier compared to the commonly used FRET-based closed-tube PCR method. The suitability of the complementation probe method for different nucleic acid assay applications was studied. 1) A duplex complementation probe C. trachomatis PCR assay with a simple 10-minute urine sample preparation was developed to study suitability of the method for clinical diagnostics. The performance of the C. trachomatis assay was equal to the commercial C. trachomatis nucleic acid amplification assay containing more complex sample preparation based on DNA extraction. 2) A PCR assay for the detection of HLA-DQA1*05 allele, that is used to predict the risk of type 1 diabetes, was developed to study the performance of the method in genotyping. A simple blood sample preparation was used where the nucleic acids were released from dried blood sample punches using high temperature and alkaline reaction conditions. The complementation probe HLA-DQA1*05 PCR assay showed good genotyping performance correlating 100% with the routinely used heterogenous reference assay. 3) To study the suitability of the complementation probe method for direct measurement of the target organism, e.g., in the culture media, the complementation probes were applied to amplificationfree closed-tube bacteriophage quantification by measuring M13 bacteriophage ssDNA. A low picomolar bacteriophage concentration was detected in a rapid 20- minute assay. The assay provides a quick and reliable alternative to the commonly used and relatively unreliable UV-photometry and time-consuming culture based bacteriophage detection methods and indicates that the method could also be used for direct measurement of other micro-organisms.

The complementation probe PCR method has a low background signal level leading to a high signal-to-background ratio and relatively sensitive nucleic acid detection. The method is compatible with simple sample preparation and it was shown to tolerate residues of urine, blood, bacteria and bacterial culture media. The common trend in nucleic acid diagnostics is to create easy-to-use assays suitable for rapid near patient analysis. The complementation probe PCR assays with a brief sample preparation should be relatively easy to automate and hence, would allow the development of highperformance nucleic acid amplification assays with a short overall assay time.