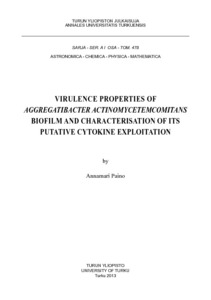 Biofilms are surface-attached multispecies microbial communities that are embedded by their self-produced extracellular polymeric substances. This lifestyle enhances the survival of the bacteria and plays a major role in many chronic bacterial infections. For instance, periodontitis is initiated by multispecies biofilms. The phases of active periodontal tissue destruction and notably increased levels of proinflammatory mediators, such as the key inflammatory mediator interleukin (IL)-1beta, are typical of the disease. The opportunistic periodontal pathogen Aggregatibacter actinomycetemcomitans is usually abundant at sites of aggressive periodontitis. Despite potent host immune system responses to subgingival invaders, A. actinomycetemcomitans is able to resist clearance attempts. Moreover, some strains of A. actinomycetemcomitans can generate genetic diversity through natural transformation, which may improve the species’ adjustment tothe subgingival environment in the long term.

Some biofilm forming species are known to bind and sense human cytokines. As a response to cytokines, bacteria may increase biofilm formation and alter their expression of virulence genes. Specific outer membrane receptors for interferon-γ or IL-1β have been characterised in two Gram-negative pathogens. Because little is known about periodontal pathogens’ ability to sense cytokines, we used A. actinomycetemcomitans as a model organism to investigate how the species responds to IL-1beta. The main aims of this thesis were to explore cytokine binding on single-species A. actinomycetemcomitans biofilms and to determine the effects of cytokines on the biofilm formation and metabolic activity of the species. Additionally, the cytokine’s putative internalisation and interaction with A. actinomycetemcomitans proteins were studied. The possible impact of biofilm IL-1beta sequestering on the proliferation and apoptosis of gingival keratinocyte cells was evaluated in an organotypic mucosa co-culture model. Finally, the role of the extramembranous domain of the outer membrane protein HofQ (emHofQ) in DNA binding linked to DNA uptake in A. actinomycetemcomitans was examined.

Our main finding revealed that viable A. actinomycetemcomitans biofilms can bind and take up the IL-1β produced by gingival cells. At the sites of pathogen-host interaction, the proliferation and apoptosis of gingival keratinocytes decreased slightly. Notably, the exposure of biofilms to IL-1beta caused their metabolic activity to drop, which may be linked to the observed interaction of IL-1beta with the conserved intracellular proteins DNA binding protein HU and the trimeric form of ATP synthase subunit beta. A Pasteurellaceaespecific lipoprotein, which had no previously determined function, was characterized as an IL-1beta interacting membrane protein that was expressed in the biofilm cultures of all tested A. actinomycetemcomitans strains. The use of a subcellular localisation tool combined with experimental analyses suggested that the identified lipoprotein, bacterial interleukin receptor I (BilRI), may be associated with the outer membrane with a portion of the protein oriented towards the external milieu. The results of the emHofQ study indicated that emHofQ has both the structural and functional capability to bind DNA. This result implies that emHofQ plays a role in DNA assimilation. The results from the current study also demonstrate that the Gram-negative oral species appears to sense the central proinflammatory mediator IL-1beta.