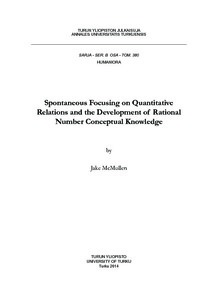 
Study V presents a longitudinal study of the development of 263 Finnish students’ rational number conceptual knowledge over a one year period. During this time participants completed a measure of conceptual knowledge of the magnitude representations and the density of rational numbers at three time points. First, a Latent Profile Analysis indicated that a four-class model, differentiating between those participants with high magnitude comparison and density knowledge, was the most appropriate. A Latent Transition Analysis reveal that few students display sustained conceptual change with density concepts, though conceptual change with magnitude representations is present in this group. Overall, this study indicated that there were severe deficiencies in conceptual knowledge of rational numbers, especially concepts of density.