Defining the art of grammar: Ancient perceptions of γραμματική and grammatica

Defining the art of grammar: Ancient perceptions of γραμματική and grammatica 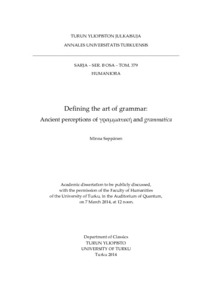 The subject of this dissertation, which belongs to the field of Classical Philology, are the definitions of the art of grammar found in Greek and Latin sources from the Classical era to the second century CE. Definitions survive from grammarians, philosophers, and general scholars. I have examined these definitions from two main points of view: how they are formed, and how they reflect the development of the art itself.

Defining formed part of dialectic, in practice also of rhetoric, and was perceived as important from the Classical era onwards. Definitions of grammar seem to have become established as part of preliminary discussions, located at the beginning of grammatical manuals (tékhnai, artes). These discussions included certain principal notions of the art; in addition to the definition, a list of the parts of the art was also typically included. These lists were formed by two different methods: division (diaíresis, divisio) and partition (merismós, partitio). Many of the grammarians may actually have been unfamiliar with these methods, unlike the two most important scholars of the Late Republic, Varro and Cicero. Significant attention was devoted to the question whether the art of grammar is based on lógos or empeiría. This epistemological question had its roots in medical theories, which were prominent in Alexandria.

In the history of the concept of grammatiké or grammatica, three stages become evident. In the Classical era, the Greek term is used to refer to a very concrete art of letters (grámmata); from the Hellenistic era onwards it refers to the art developed by the Alexandrian scholars, a matter of textual and literary criticism. Towards the end of the Hellenistic era, the grammarian also becomes involved with the question of correct language, which gradually begins to appear in the definitions as well.