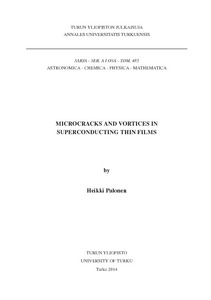 In this work, superconducting YBa2 Cu3O6+x (YBCO) thin films have been studied with the experimental focus on the anisotropy of BaZrO3 (BZO) doped YBCOthin films and the theoretical focus on modelling flux pinning by numerically solving Ginzburg- Landau equations. Also, the structural properties of undoped YBCO thin films grown on NdGaO3 (NGO) and MgO substrates were investigated. The thin film samples were made by pulsed laser ablation on single crystal substrates.

The structural properties of the thin films were characterized by X-ray diffraction and atomic force microscope measurements. The superconducting properties were investigated with a magnetometer and also with transport measurements in pulsed magnetic field up to 30 T. Flux pinning was modelled by restricting the value of the order parameter inside the columnar pinning sites and then solving the Ginzburg-Landau equations numerically with the restrictions in place. The computations were done with a parallel code on a supercomputer.

The Ginzburg-Landau simulations were able to reproduce the measured magnetic field dependence of the critical current density for BZO doped and undoped YBCO. The simulations showed that in addition to the large density also the large size of the BZO nanorods is a key factor behind the change in the power law behaviour between BZO doped and undoped YBCO. Additionally, the Ginzburg-Landau equations were solved for type I thin films where giant vortices were seen to appear depending on the film thickness. The simulations predicted that singly quantized vortices are stable in type I films up to quite large thicknesses and that the size of the vortices increases with decreasing film thickness, in a way that is similar to the behaviour of the interaction length of Pearl vortices.