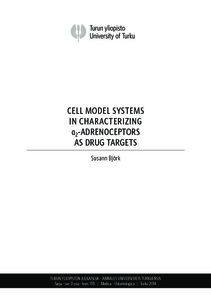 The three alpha2-adrenoceptor (alpha2-AR) subtypes belong to the G protein-coupled receptor superfamily and represent potential drug targets. These receptors have many vital physiological functions, but their actions are complex and often oppose each other. Current research is therefore driven towards discovering drugs that selectively interact with a specific subtype. Cell model systems can be used to evaluate a chemical compound's activity in complex biological systems. The aim of this thesis was to optimize and validate cell-based model systems and assays to investigate alpha2-ARs as drug targets.

The use of immortalized cell lines as model systems is firmly established but poses several problems, since the protein of interest is expressed in a foreign environment, and thus essential components of receptor regulation or signaling cascades might be missing. Careful cell model validation is thus required; this was exemplified by three different approaches. In cells heterologously expressing alpha2A-ARs, it was noted that the transfection technique affected the test outcome; false negative adenylyl cyclase test results were produced unless a cell population expressing receptors in a homogenous fashion was used. Recombinant alpha2C-ARs in non-neuronal cells were retained inside the cells, and not expressed in the cell membrane, complicating investigation of this receptor subtype. Receptor expression enhancing proteins (REEPs) were found to be neuronalspecific adapter proteins that regulate the processing of the alpha2C-AR, resulting in an increased level of total receptor expression. Current trends call for the use of primary cells endogenously expressing the receptor of interest; therefore, primary human vascular smooth muscle cells (SMC) expressing alpha2-ARs were tested in a functional assay monitoring contractility with a myosin light chain phosphorylation assay. However, these cells were not compatible with this assay due to the loss of differentiation. A rat aortic SMC cell line transfected to express the human alpha2B-AR was adapted for the assay, and it was found that the alpha2-AR agonist, dexmedetomidine, evoked myosin light chain phosphorylation in this model.