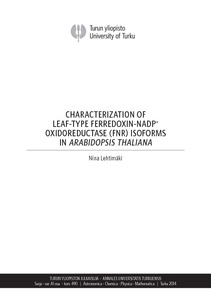 Life on earth is based on sunlight, which is captured in chemical form by photosynthetic reactions. In the chloroplasts of plants, light reactions of photosynthesis take place at thylakoid membranes, whereas carbon assimilation reactions occur in the soluble stroma. The products of linear electron transfer (LET), highly-energetic ATP molecules, and reducing power in the form of NADPH molecules, are further used in the fixation of inorganic CO2 molecules into organic sugars. Ferredoxin-NADP+ oxidoreductase (FNR) catalyzes the last of the light reactions by transferring electrons from ferredoxin (FD) to NADP+. In addition to LET, FNR has been suggested to play a role in cyclic electron transfer (CET), which produces ATP without the accumulation of reducing equivalents. CET is proposed to occur via two putative routes, the PGR5- route and the NDH-route.

In this thesis, the leaf-type FNR (LFNR) isoforms LFNR1 and LFNR2 of a model organism, Arabidopsis thaliana, were characterized. The physiological roles of LFNRs were investigated using single and double mutant plants. The viability of the single mutants indicates functionality of both isoforms, with neither appearing to play a specific role in CET. The more severe phenotype of low-temperature adapted fnr2 plants compared to both wild-type (WT) and fnr1 plants suggests a specific role for LFNR2 under unfavorable growth conditions. The more severe phenotype of the fnr1 x fnr2 (F1 generation) plants compared to single mutants reflects down-regulated photosynthetic capacity, whereas slightly higher excitation pressure indicates mild over-excitation of electron transfer chain (ETC). However, induction of CET and various photoprotective mechanisms enable adaptation of fnr1 x fnr2 plants to scarcity of LFNR. The fnr1 fnr2 plants (F2 generation), without detectable levels of LFNR, were viable only under heterotrophic conditions. Moreover, drought stress induced acceleration of the rate of P700 + re-reduction in darkness was accompanied by a concomitant up-regulation of the PGR5-route specific components, PGR5 and PGRL1, demonstrating the induction of CET via the PGR5-route. The up-regulation of relative transcriptional expression of the FD1 gene indicates that the FD1 isoform may have a specific function in CET, while no such role could be defined for either of the LFNR isoforms.

Both the membrane-bound and soluble LFNR1 and LFNR2 each appear as two distinct spots after 2D-PAGE with different isoelectric points (pIs), indicating the existence of post-translational modifications (PTMs) which do not determine the membrane attachment of LFNR. The possibility of phosphorylation and glycosylation PTMs were excluded, but all four LFNR forms were shown to contain acetylated lysine residues as well as alternative N-termini. N-terminal acetylation was shown to shift the pI of both LFNRs to be more acidic. In addition, all four LFNR forms were demonstrated to interact both with FD1 and FD2 in vitro