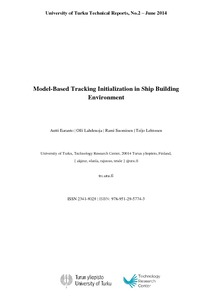 An augmented reality (AR) device must know observer’s location and orientation, i.e. observer’s pose, to be able to correctly register the virtual content to observer’s view. One possible way to determine and continuously follow-up the pose is model-based visual tracking. It supposes that a 3D model of the surroundings is known and that there is a video camera that is fixed to the device. The pose is tracked by comparing the video camera image to the model. Each new pose estimate is usually based on the previous estimate. However, the first estimate must be found out without a prior estimate, i.e. the tracking must be initialized, which in practice means that some model features must be identified from the image and matched to model features. This is known in literature as model-to-image registration problem or simultaneous pose and correspondence problem. This report reviews visual tracking initialization methods that are suitable for visual tracking in ship building environment when the ship CAD model is available. The environment is complex, which makes the initialization non-trivial. The report has been done as part of MARIN project.