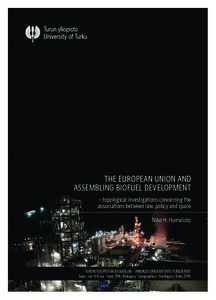 Biofuels for transport are a renewable source of energy that were once heralded as a solution to multiple problems associated with poor urban air quality, the overproduction of agricultural commodities, the energy security of the European Union (EU) and climate change. It was only after the Union had implemented an incentivizing framework of legal and political instruments for the production, trade and consumption of biofuels that the problems of weakening food security, environmental degradation and increasing greenhouse gases through land-use changes began to unfold. In other words, the difference between political aims for why biofuels are promoted and their consequences has grown – which is also recognized by the EU policy-makers. Therefore, the global networks of producing, trading and consuming biofuels may face a complete restructure if the European Commission accomplishes its pursuit to sideline crop-based biofuels after 2020. My aim with this dissertation is not only to trace the manifold evolutions of the instruments used by the Union to govern biofuels but also to reveal how this evolution has influenced the dynamics of biofuel development.

Therefore, I study the ways the EU’s legal and political instruments of steering biofuels are coconstitutive with the globalized spaces of biofuel development. My analytical strategy can be outlined through three concepts. I use the term ‘assemblage’ to approach the operations of the loose entity of actors and non-human elements that are the constituents of multi-scalar and -sectorial biofuel development. ‘Topology’ refers to the spatiality of this European biofuel assemblage and its parts whose evolving relations are treated as the active constituents of space, instead of simply being located in space. I apply the concept of ‘nomosphere’ to characterize the framework of policies, laws and other instruments that the EU applies and construes while attempting to govern biofuels. Even though both the materials and methods vary in the independent articles, these three concepts characterize my analytical strategy that allows me to study law, policy and space associated with each other.

The results of my examinations underscore the importance of the instruments of governance of the EU constituting and stabilizing the spaces of producing and, on the other hand, how topological ruptures in biofuel development have enforced the need to reform policies. This analysis maps the vast scope of actors that are influenced by the mechanism of EU biofuel governance and, what is more, shows how they are actively engaging in the Union’s institutional policy formulation. By examining the consequences of fast biofuel development that are spatially dislocated from the established spaces of producing, trading and consuming biofuels such as indirect land use changes, I unfold the processes not tackled by the instruments of the EU.

Indeed, it is these spatially dislocated processes that have pushed the Commission construing a new type of governing biofuels: transferring the instruments of climate change mitigation to land-use policies. Although efficient in mitigating these dislocated consequences, these instruments have also created peculiar ontological scaffolding for governing biofuels. According to this mode of governance, the spatiality of biofuel development appears to be already determined and the agency that could dampen the negative consequences originating from land-use practices is treated as irrelevant.